How to be a Hash House Harrier

How to be a Hash House Harrier
Jared Romey explains the time-honored tradition of getting wasted and running places.

Over the course of the last five years, I’ve hashed with 28 packs in 11 countries. I’ve run through Muslim slums and desert oil fields in the Middle East, the four green fields of Ireland, the sugar cane fields of Barbados, the shiggy of Puerto Rico and the urban density of Port-of-Spain, Trinidad. I find Hashers to be the best people in the world. People who will go out of their way to pick you up at the airport, transport you around their town, let you sleep on their couch, run through the woods with you, and share their alcohol. – Saigon Sally (aka Curtiss), PRH3

New in town? Looking to explore out-of-the-way, non-tourist places? Know where to meet fun people? The answer is the Hash. No, it’s not the drug. It’s not the food, either. And it’s mostly legal. 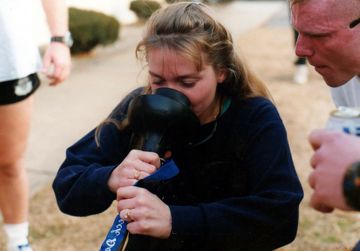 Somebody’s in trouble! Photo by davidclow

You usually first hear about it in whispers. “You Hash?,” someone may ask. “What’s that?” you reply. “Oh nothing. You kinda run some, but not always, and there’s definitely lot’s of beer, maybe even a bit of nudity. But only if you want. It’s really not as bad as it sounds. You should try it. It’s fun. I promise.”

Think of the Hash as kind of a social filter for great friends. It weeds out the straight-laced, responsible people. The left-over misfits are Hashers.

They may be Marines guarding the local embassy, the pilot who just landed your plane, that guy who manages your off-shore bank accounts, the CEO of a haircare company or a recent grad teaching English to locals. They may be expats or locals. Marathoners, teetotalers, pot-bellied couch potatoes, multi-lingual math geniuses, beach bums. They are all Hashers.

The Hash, more formally known as Hash House Harriers (HHH), is a self-professed “Drinking club with a running problem.” Founded before World War II, the Hash has grown into a worldwide phenomenon. This social club meets in cities throughout the world. Most meetings include some form of running or walking and alcohol, often both at the same time. There is always singing and perhaps a little debauchery. 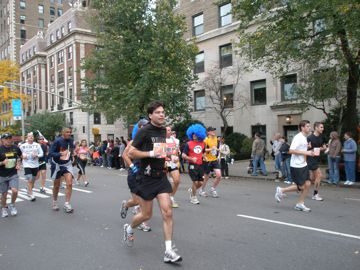 Flour marks the dead-ends, song checks, beer checks, boob checks, the real trail and false trails. On any given trail, there is a 100% chance someone will get lost at some point. Just make sure you are not that person.

After the run/walk, there’s always the Hash circle. Punishments are assessed for the stupid stuff people do along the trail. These violations could be sex on the trail (no, not REALLY sex, just PDA), technology on trail, shortcutting and numerous other invented violations. The punishment is always the same. Get in the circle. Sing a song. Do a down-down. Repeat. Hares do down-downs, defined as singing a song and then slamming down your beverage of choice in one gulp. Virgins (new hashers) do down-downs. Front Running Bastards (FRBs) do down-downs. Really, everybody does down-downs.

Also, if you become a regular you will be named. Often, it is after you screw up or do something stupid. Most likely, it is not a flattering name. Ankles for Earrings, Passed Out Pumping, Play In My Pants (PIMP), Clitty Litter, Stick It In My Socket and Naughty Man are all Hash names that evoke a certain fear as to what devious behavior earned them these names. 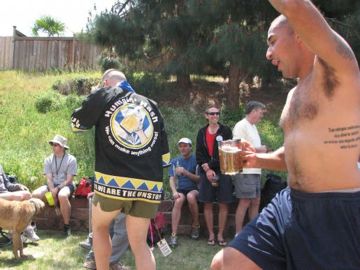 For as off-the-wall as it sounds, most Hashes are well-organized groups. Each Hash is run by a Mis-Management Committee of a General Manager (GM), Religious Adviser (often the most unholy of people), Hare Raiser, Hash Cash, Beermeister and Haberdasher. The Committee organizes each event, everything from who lays the trail and runs the Hash circle, to purchasing beverages or offering merchandise for sale. Most Hashes charge a nominal fee to cover expenses, but you will recoup this in fun and friends in the first five minutes.

Find out about your local Hash ahead of time. Is it family-friendly, pet-friendly, extreme runners only or for walkers too? Each Hash is different. Some are miles of running, with a smidgen of social activity thrown in at the end. Others are social events, with a bit of a walk as an afterthought.

There are Hashes where kids are present, manners are required and drinking is kept to socially acceptable levels. And then there are Hashes where including kids would be a felony, alcohol consumption is beyond belief, and a little nudity is a given. No matter which version you choose, meeting great people is guaranteed.