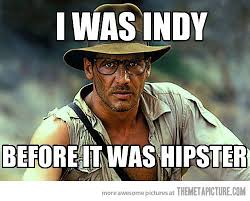 Prepare your camo, survival kit, polar bear fur, fedora, and (if you’re feeling particularly bold/kinky/adventurous) your whip as the hash gets ready to raid previously uncharted territory in the Beijing region. This weekend’s crusade may require maneuvers that promise to wake up the Indiana Jones in even the meekest of hashers, such as balancing between precarious ledges, rappelling sliding down frozen waterfalls and avoiding hidden booby traps. Hashers may also encounter such ferocious beasts as farmers (hopefully without rocks in their arsenal), their dogs, and these dogs’ guards. If you survive the trail – or at least most of it – you’ll be able to record your battle scars for all eternity at a scenic hash hold!