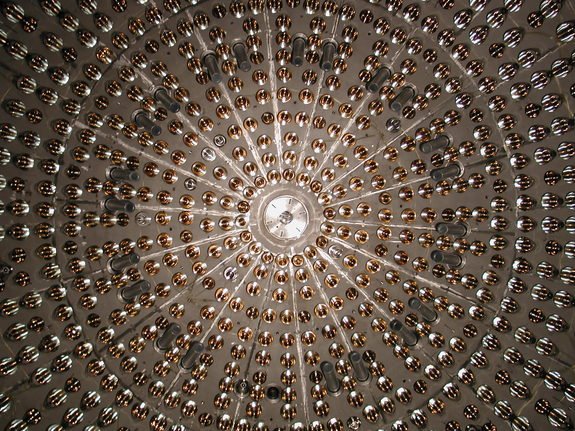 This view shows the Borexino stainless steel sphere. The experiment made the first measurements of the difficult-to-detect solar neutrinos that power the sun.

At fair night of Thursday on dripping wet ground post-slight rain. GM of Full Moon Hash, Bearded Clam and Noah’s Arse pose a 69 combined torso upright in down-down circle of 8 hashers before a tiny chophouse in dense hutongs, the strobe lights of cameras flicker nonstop with screams and laughters. It lasts around 2 mins. Seems to prove all of repunit prime and palindromic numbers are strobogrammatic in which myriad iterations bring about a miracle of symmetry in the universe. And yet, nobody knows why 196 is smallest Lynchrel number candidate.

2 walkers like Karate and newcomer called Just Coco stray in a zigzag and crowded well-illuminated bar streets and wrap up to go back small eatery themselves. There are less walkers in Full Moon Hash generally.

The hare for the first length falls on the shoulders of Dreamin’ Semen as his last hashing in Beijing. The long floured stripes as sign in the dark clearly lead the hashers through every nook and cranny of a block of alleyways by a block of alleyways. NA admits she just tags after the hashers rather than the mark; Pickle Boy is focused on hunting up the mark leaving no stone unturned. Soon enough the hashers hit the first beer stop where DS awaits by sitting the steps to drink alongside a canal with serene nocturne. 5 hashers holds up for a while but cannot see the walkers to come up, plus, many phone calls for them and still fails to contact.

Co-GM of FMH, Whose Red Wienie has to take action on marking second length for a hashing trail. Still, everybody disappears to bustling and hustling streets and alleys. The direction looks like going back to the start point with worry for 2 walkers getting lost. All of a sudden, a sign for Open Check in a petite cross confuses these 5 hashers in either direction with no mark. When gathtering back at this cross, WRW shows up with the lack of the flour and has to stop to mark the trail. All hashers amble back to the restaurant. 2 walkers astray loiter back later on as the mini-circle takes place.

A short regular process of circle is whipped up and all move on yammy dumplings. Pussy Nibble springs out for hash food. And then the most head for abutting 2 bars till midnight, our beloved former FMH’s GM, 6 Kuai Short turns up for one night, ringing the bells, good time!

A passing shower comes pat to compel 30-odd hashers to move indoor on Sunday as a hashing circle is in the middle of celebrating a consummation on a rooftop of a 4-storeies fancy restaurant building. Meanwhile stopping some hashers from skipping out the circle all along, such as On Your Knees and Drill Me just coming for a circle,etc., Dazed & Confused as GM and He-man Dry Hole as major hare jointly host a songful Tanbi-style function. 2 newcomers and some latecomers as well as long-time-no-sees; Karate and Butt & Paste as walking hare win their 10th Beijng respectively; Horny On Top scores her Beijing 69th run patch and DH ably lies at full length on  the ground between her legs for a buffoonery; 3 hares are hailed to be birled together and never come to pass a rubber drink; Crash Test Dummy alone is praised to continue to show up subsequent to his participation in Tianjin Red Dress Run on Saturday with over 20 Tianjin hashers and about 8 Beijing hashers and there is an obvious scarlet lip-print on left side of his neck and rhapsodizes over Tinjian snacks; Picke Boy as usual in high spirits volunteers to crack the bottles of beer and tips it for the hashers; CumShot becomes used to buy a bite like creaking dates to award the hashers; Just Sandra in silence joins Hash event more often of late; Honey I Am Late always blooms her smile to be roseate from beginning to end; Bjorn Again and Red Snatcher taste each episode clandestinely; and otherwise. Turns out with a Swing Low leaded a chorus by DH with rakish gesture language along with hashers on the strength, all and singular, la! joie de vivre from what you have outdone yourself. The half pig out a local meal.

In the very beginning of hashing trail has been in habit of puzzling the hashers with out-of-the-way alpha sign for space, more often than not, the hare has to point a way out, a matrix of color hashers rush into a large tract of residential area where a maze of inhabitant buildings chain plenty of the hashers’s energy. There are a slew of Two-Way and Three-Way stringing out in the midst of the hashers regardless of the velocity and stamina, even more making sense of guess work based on gut feeling, i,e,. Just Kevin and Transylvestite somehow can pick up a right bearing to be afront up their street, where the hashers sweep through, for the most part, giving the hashers an association with familiar past, must move on a non-marked trail or Oh Shit the moment dropping into an intimate route. Passing thru a cramped trail of hamlet. Teddy Secret with long wavy hair to her waist grumbles away her aging lookism and first-world problem; Just Yogi seems to charge full hydrogen to gallop; eventually Just Kate and Just Youshan run ahead to hit the first beer stop in a lane where a handful of walkers have relaxed for a break. Just Matt has more topics with Just Julia; Karate still asks who’s Allen talked with him on WeChat yesterday; a couple of magpies perching on the treetop overhead the hashers are chirping for blessing. Don’t get the hashers’s heads get in the way to march when it comes to open check.

At the mercy of the clear-cut marks on the horizonal line of sight on the poles, Eratica keeps scrupulous about every detail to guide the way in his gruff tone, “On On!” forestalling fatigue in the train of cold drinking as mental stimulant; Just Peter and Benz Over jog on and off in the backward line-up to pull into an open garden with a body of water where the locals in droves are angling, along with bank of a lake dotted some exquisite artworks, the second beer stop is settled in next to the entrance. Only running hashers outstretch their bodies with gaiety like Heart On and Rabbit and so on. As long as getting the sweat, cold beer clicks with hormone for a laid-back complacency becomingly. At the very moment the hares urge the hashers to step on the trail, upon thinking high of one way with a sign, still looking askance at anywhere, yea! alighting upon a mark out of the beer drive raying effects, making a beeline for hashing trail along the thoroughfare, roaring down on the in-words, “beer stop!” as third one on sidewalk, there ain’t walkers anymore, ain’t remember how many bottles to be done but all the time being agog with a difference each time, abiding! As if by magics, to rotate back to the restaurant via a lane, none but being commensurate with yet another one-of-a-kind hashing experience, therewith pigeonholing this happy time.

The really important thing is to profit from the losses, that requires intelligence; and it makes the difference between a man of sense and a fool. Faith is one of the forces by which we live and the total absence of it means collapse.