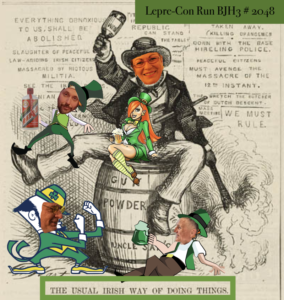 Top o’ the morning to ya, hashers and harriettes. It’s that wonderful holiday again where we start the day with alcoholic coffee, wear green, and go on a jaunt frolicking between drinking spots for hours on end until we end up as a disheveled pile of Fenian shite, asleep drunk at a pub, regretting our poor decision making and wiping our bloody nose on pancakes. NO! It’s not 7/11 or Tuesday! It’s St. Paddy’s Day!

For anyone who remembers Santa-con (I don’t), we teamed up with that massive pub crawl for an exceptionally drunken hash with the unconventional addition of actual bars on trail. We’re doing it again this year for the first ever “Lepre-con” (not to be confused with Leper-con).

The trail / trial will be long but you won’t go thirsty. We will start at 4corners bar and head out at 1:30 instead of 2. From there the trail will pass three more bars (Moonee’s, The Great Outdoors, and Great Leap). It will be longer than a usual trail (the walkers is about 8km).

Gobblin’ McKing – “Of course we have cheap beer! Each bar will have an alternate cheap-o stop for all the Fumblin’ Dublins”

Mick – ‘But if the hash is gonna be long, will there be enough beer?’

Gobblin’ McKing – “What a true-blue hasher! Of course, if 4 bars/beer stops aren’t enough – we will have several opportunities to buy beers 2 go on trail!”

15rmb for circle only. Beer and water on trail is pay as you go.

Trail:
Trail is A-B with no bag drop.

Our hash bar, Paddy O’Shea’s of course. Followed by our on-after-the-on-after at QS for the real legends.

By subway, go to Shichahai Subway Station, Exit A2

Come out of Exit A2, head north, after a while turn left, stagger for a couple of minutes then veer right, follow the road until you encounter a riotous assembly of hashers and Lepre-Cons. 400 meters from Shichahai station to the meeting point. 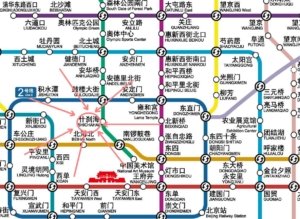 Hares for the next 6 weeks: