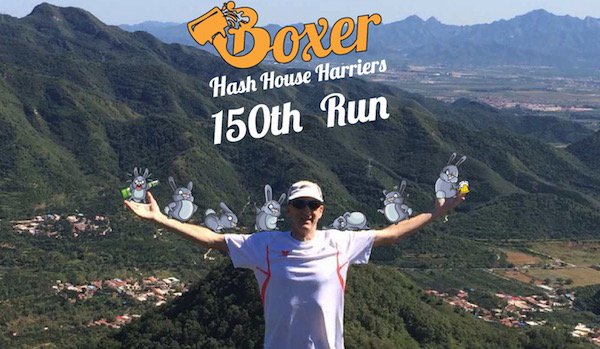 Wind your clocks back to December, 2003. The Beijing Boxer Hash co-founders, Pays for Sex and Cunt Runner doubled as virgin hares taking a motley looking crew of dastardly hashers around a location appropriately named The Secret Valley. Of course it snowed, the local authorities wouldn’t let people through a gate that was open during the recee, marking was poor, hashers got lost and a Beijing institution was born. Fast forward 13+ years, through kidnapped buses, hornet nest attacks, one never found lost hasher, farmers blocking trails, berserk guard dogs, umpteen treks along the Wall, yadda yadda yadda, the tails are seemingly endless … we have arrived at Beijing Boxer Hash run number 150 & it’s time for a big celebration!

When the hares went out looking for an inspired run site for the 150th running of the Boxer Hash they came upon a beautiful, formerly remote village in the hills surrounding the North Capital. Upon discovering the Empress Dowager from the Liao dynasty was born in this very village in … get this … 1150 AD! Destiny! The fates declared loud and clear, this has to be the site for the Boxer Hash 150th run.

This truly is the perfect location befitting such a momentous occasion. It is the site where the famous XingLong Buddhist temple was situated. It has stunning views of the surrounding mountains. It overlooks the plains of Beijing. The locals are the nicest people you will ever encounter on a hash trail. No angry famers threatening runners, nor local thugs highjacking buses here. Bring extra money, you can buy organic apples & peaches, mountain chicken eggs, locally grown walnuts and some of the best honey anywhere. Yes Virginia, we will be passing by the bee hives. You say you like horses? The hares have even incorporated a riding stable into the run. You like to swim in the middle of July? Bring your swim trunks. They’ve promised to refill the swimming hole by then. (OK, so you might have to return to Beijing and buy a pass to a local pool … but we tried). They even have (mostly) friendly dogs in the area!

Even the bash is at a special location. The hares have chosen an award winning restaurant. OK, we admit when we pressed them on what exactly the award was, they said they won for being the place most likely to host a bunch of ne’er do well hashers on a special anniversary run. But hey, an award is an award! 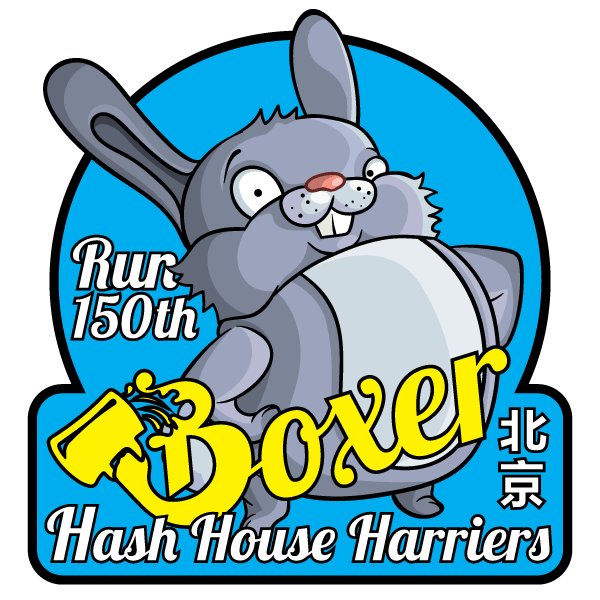 NOTE: Due to demand, only the first 50 sign-ups will be guaranteed a spot on the bus. If there’s enough demand, we may consider getting a second bus, but we need y’all wankers to sign up!! On on!!

And because we know hashers love discounts, we’ll throw in a deal on haberdashery! Any hasher who signs up AND pays (either We Chat or in person) before the hash on Sun 7/17 can buy a limited edition Boxer 150 patch + dryfit Boxer 150 tank for only 80 RMB! Bargain!! All haberdashery designed specially by Dazed & Confused. Otherwise, patches will go for 20 RMB and tanks for 75 RMB.

** IMPORTANT NOTE:  THE BEIJING BOXER HASH IS AN OFF-ROAD RUNNING HASH GOING OUT TO THE HILLS AROUND BEIJING ONCE A MONTH. WE USUALLY AIM FOR THE SECOND SATURDAY OF EACH MONTH, BUT MAY VARY DEPENDING ON THE HARES’ AVAILABILITY, CURRENCY EXCHANGE FLUCTUATIONS, THE SCORE OF THE MOST RECENT BEIJING GUO’AN GAME, THE BUS DRIVER’S MOOD AND OTHER VARIABLE FACTORS WE HAVE ZERO CONTROL OVER. WE DO NOT ADJUST FOR WEATHER CONDITIONS (BRING A TOWEL, YOU WON’T DROWN) NOR POLLUTION LEVELS (THEY’RE LOWER OUT IN THE MOUNTAINS ANYWAY). IT’S OK TO WALK BUT NOT TO LALLYGAG. KEEP MOVING … WE’RE A RUNNING HASH. HEART ATTACKS ARE NOT PERMITTED. AS WE ARE OUT ON MOUNTAIN TRAILS, IT’S EASY TO GET LOST. IF YOU’RE TOO STUPID TO BRING A PHONE WITH YOU (LIM&S, LOOKING AT YOU!) AND YOU GET LOST. WE WON’T PH*CKING CARE, NOR WILL WE PH*CING PIN YOU EITHER. WE MAY OR MAY NOT SEND A SEARCH PARTY LOOKING FOR YOU. IF WE DO, CHANCES ARE IT WILL CONSIST PRIMARILY OF RABID DOGS AND HUNGRY WOLVES. THAT BEING SAID, WE ARE GLAD TO HAVE YOU JOIN US AND HOPE YOU ENJOY A GREAT DAY!  (BY THE WAY, NO YOU WON’T BE BACK FOR YOUR IMPORTANT DINNER DATE BRING THEM ALONG INSTEAD)