China’s capital since the Mongol Yuan dynasty, Beijing is one of China’s true ancient citadels. It is also an aspiring, confident and modern city that seems assured of its destiny to rule over China ad infinitum.

A vast and symmetrical metropolis, Beijing is the orderly seat of the communist political power in China, so its architecture traces each and every mood swing from 1949 to the present, from felled hútòng (narrow alleys) to huge underground bomb shelters scooped out during the paranoid 1970s. One moment you are sizing up a blank Soviet-style monument, the next you spot a vast, shimmering tower rising up from the footprint of a vanished temple.

History may have been trampled in Beijing over the past half century, but there’s still much more substance here than in China’s other dynastic capitals, bar Nánj?ng or K?if?ng. You just need to do a bit of hunting and patient exploration to find the historical narrative. It’s also essential to sift the genuine from the fake: some of Beijing’s once-illustrious past has been fitfully resurrected in the trompe-l’oeil of rebuilt monuments. Colossal flyovers and multilane boulevards heave with more than three million cars but ample pockets of historical charm survive. It’s the city’s epic imperial grandeur, however, that is truly awe-inspiring.

Frank and uncomplicated, Beijing’s denizens chat in Beijinghuà – the gold standard of Mandarin – and marvel at their good fortune for occupying the centre of the known world. And for all its diligence and gusto, Beijing dispenses with the persistent pace of Shàngh?i or Hong Kong, and locals instead find time to sit out front, play chess and watch the world go by.

A bit of Beijing

Beijing redefines and reinvents itself constantly. Stunning historical sights rub shoulders with cutting-edge architecture as the pace of change leaves residents breathless. There is a sense that this once conservative capital is enjoying the time of its life. Here is a quick taste test of what the city has to offer.

Beijing ’s Capital Airport is 17 miles from the centre. The Airport Line light-rail connects with the underground at Dongzhimen (£2.50). A taxi into the city costs around £8.50.How to get aroundThe subway is fast, reliable and reaches most points of interest. Line 1 runs east-west, Line 5 north-south and Line 2 circles the city. The flat fare is 20p. Most hotels can arrange taxis and bikes (bike rental £2.50 per day; taxis charge 20p per km). 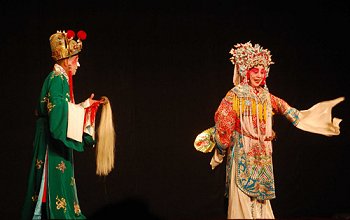 MoneyForeign currency and travellers cheques can be changed at large branches of the Bank of China, CITIC Industrial Bank, the Industrial and Commercial Bank of China, HSBC, the airport and hotel moneychanging counters, and at several department stores (including the Friendship Store), as long as you have your passport. Hotels give the official rate, but some will add a small commission. Useful branches of the Bank of China with foreign-exchange counters include a branch next to Oriental Plaza on Wangfujing Dajie, in the Lufthansa Center Youyi Shopping City, and in the China World Trade Center. For international money transfer, branches of Western Union can be found in the International Post Office and at the post office at No 3 Gongrentiyuchang Beilu (6416 7686).If you have an Amex card, you can also cash personal cheques at CITIC Industrial Bank and large branches of the Bank of China.

ATMs that take international cards can now be found in abundance. The best places to look are in and around the main shopping areas (such as Wangfujing Dajie, Sanlitun) and international hotels and their associated shopping arcades; some large department stores also have useful ATMs. There’s a Bank of China ATM in the Capital Airport arrivals hall. Other useful ATMs are: