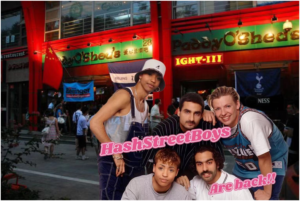 Over 4,000 years ago, Sumerians carved in stone the earliest musical notation discovered to date. In 1888, Arthur Sullivan made history when his song “The Lost Chord” became the first ever recorded piece of music. Both achievements, though, pale in comparison to the release of Spice Girls’ debut studio album “Spice” in 1996.

To celebrate humanity’s enduring ability to take every beautiful artform and turn it to shit, we will walk and run this week’s trail as we openly listen to the cringiest tunes produced over the past few decades. We know you like it, we’ve seen you in KTVs.

More importantly, during each beer stop, the hashers will compete in a quiz that’s all about horrible “Guilty Pleasure” music and TV shows, and win prizes!.

In a dedicated group chat for the quiz, we’ll send photos/videos of hashers’ faces superimposed on famous singers/actors known for being really bad. The first hasher to guess who’s the singer/band/TV Show etc wins the prize. 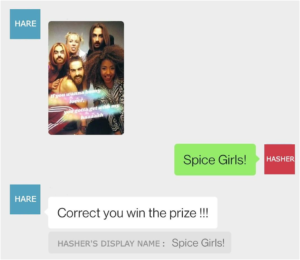 Figure 1: Example of how the quiz will go.

P.S: According to the Oxford Dictionary, a Guilty Pleasure is “A movie, TV program, or piece of music, that one enjoys despite feeling that it is not generally held in high regard.” If you read that title and got excited thinking you’ll be tied up and pegged, we are sorry to disappoint.

Dresscode: This is your time to shine, baby! Put on the most flashy and glittery outfit you have.

What; A-to-A hash (bag drop at the restaurant), and is not dog-friendly as well as not kid-friendly.

As usual, this is an adult activity in which we behave like children so expect to see nonsense, licentiousness, a modest level of drunkenness and considerable rude behaviour going on. There may be vomiting on this occasion. Don’t be offended; we’re always like that and if you’re here you’re doing it too. For all of those reasons this isn’t a kid-friendly activity so – unless you’re table 1 – best stay home. More regular members of society are of course very welcome and can of course take part, but be polite, don’t be purposefully rude and remember that if you’re running there’s no winner.
By Shitposter 69|2023-01-04T23:58:03+08:00January 4th, 2023|Beijing Hash House Harriers|