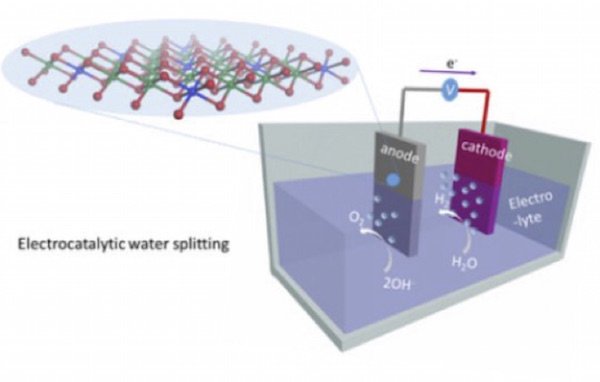 The new material is a monolayered double hydroxide involving nickel and vanadium, which offers a state-of-art electrocatalyst for water oxidation. The low-cost, highly efficient nickel-vanadium monolayer outperforms other electrocatalysts that are composed of non-precious materials. A hydrogen-fuel economy could finally become a reality.

The shortness of breath that humidity and pollution fill in the air declares the dog days. RA Blister Fister blesses the trail by lifting a tin of beer to drink together with three hares with prayer in a starting circle of nearly thirty hashers. Matter-of-factly amazing Boxer Hash #150 yesterday for veteran hashers Kiss My Maple Leaf’s the 150th run seemed to usher about forty boffin hashers to 47 Tucanae – best place to search for signs of interstellar alien civilization.

PedalPhile and Herr Splashy Pants rush ahead to grope the trail. Listen! A resounding shout for On On, it’s Whora the Explora coming back after over one year of abroad learning and brings her parents to join hashing today. Breaking into an open park and then seeing an local old lady lying on the flagging for cooling down, not need to Baywatch escort, a meandering pathway leads hashers up to Hash Hold where a giant bell called Shameful Centuries Bell catches the eyes. KMML and hashers come late. Hashers surely take the pictures. Jacking in a mark of Open Check at an overpass for a little while. BlowJob pitches an idea for which we should head into direction of swimming site nearby; Pickle Boy tumbles to a park-ward trail, there’s a lake for swimming inside; Phantom pushing a perambulator which Phantom Menace sleeps in eventually yells out the harsh mark. All hashers go over a foot bridge down to the western gate of Yuyuantan park that means Jade Deep Pool park for the first beer stop. Cold beer comforts sweaty hashers for the time being. Getting some rest for a spell and entering this park with admission ticket.

A mark of Open Check separates runners and walkers half and half. The running trail rambles through a rolling wooded mounds in following the flour mark by the hare Just Ollie. All of a sudden, hearing a thrashing plop behind and as returning to eye that Pre-Lubed has lain on the ground and groans her left ankle that’s sprained. WTE instructs her to keep right position and Agent Orgy as hare watches the situation that’s playing a role of Baywatch escort. A few minutes later, PL soon restores her spirit and moves forward again. Catching up with others at a grand stone arch bridge and along a lake, meeting the second beer stop at a lakefront where many locals are swimming. Some of hashers have no hesitation to wade into the shallow lake and disintegrate swelter into refreshing water, drinking Belgian Vedett and Liafman and splashing water gam a Baywatch cool time, such as BJ, BF, PB, Just Ollie, AO, Sweet & Furry, Finger My Dough, Crash Test Dummy, Phantom, Tight Quim, Algae Bra, HSP, Taxi Rider Her, etc. Some prefer to be audience like Creamy Lips, Shaven Not Stirred, Rambo Number Five, Just Leigh, virgins and so on. After enjoying ourselves to the full, starting to run back to home restaurant via the busy streets, residential area and crossway. The celebrative circle is sited at a quiet green belt.

Topless PM wears a bathing cap and swim goggles and holds a plastic fork and plastic vat as well as plastic ball and is poised to provide Baywatch service; Ezy Rider performs a proxy GM to host the ritual according to process. Three virgins are greeted with Hash song and cock keyring. Two small pieces of crystal ice block are placed in the center of circle to make out chakra for good measure. First of all, serving three hares to perch on. Just then a local man stands out to prevent the circle and states this area belongs to military reservation. The circle has to be moved to another passageway close to restaurant. S&F also coordinates with an unhappy local man for allowing hashers to have a short celebration there; RA BF drapes a Bali-style mantle reads out a list of hashers’s anecdotes and the hasher concerned kindles with riding on ice block. Some local passers-by and audiences from window upstairs look at hashers agog. Phantom, TQ and unknown hasher face the wall and drops down the pants and let PB call out WHERE’S THE TOILET in Chinese. Time to name Just Xixi and she’s abashed at it and after a dab mental struggling, then sitting on ice block and accepts her Hash Handle under a whirlwind beer shower from hashers after a round of nomination for Wandering Tongue. The Hasher Song, screams and white beer foam relax the waff nerves on gleaming gossamer roadway. Over fifteen hashers dine on a local hearty meal in a decent private room.

Being able to shift to a higher realm of perception can help us to find solutions to human problems, resolve conflicts, heal disease, and experience oneness with all of creation when, before, we were experiencing distress and separation. Healing is not about the rules or ideas, it’s about vision and spirit.