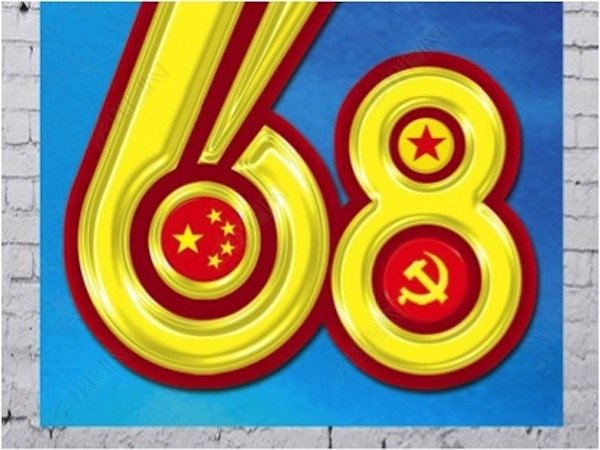 It’s a clear day on Sunday, also October 1st. Nearly 30 hashers roll up to enjoy a beautiful hashing around southeast 2nd ring road . A local man in haste approaches Triple X-Ray to complain the hashtags on sidewalk. It turns out that Hash marks are not allowed to put there. Danger Zone works on Hash Cash. Algae Bra is the first time to act as GM to open a simple remark and Shanghai Man then holds his phone to read out aloud the prayer as proxy RA. Of course, 3 hares Mind the Gap, Heart On and Dry Hole symbolically bend down their bodies and 7 virgins assume smile to bend ears toward this seriocomic scene. Principal Penetration cannot help asking where the beer is. The hashers start “kicking ass”.

Soon hearing a voice for On On to make sure a direction along with street and turning right to check forward such as Slappy Seconds, Pickle Boy, virgins and so on. Crossing the street into an alleyway to sweat out one’s guts to scan the marks, suddenly encountering an Oh Shit mark, but don’t see a 2-Way or 3-Way mark before it, the hare in nothing flat marks another way out, passing through the garden-style treelawn, at an Open Check mark, an obscure broken iron bars becomes an entryway of trail in a residential area until catching sight of a Beer Near mark, nevertheless after seeking out the 4 marks, the first beer stop with ironclad sign jumps out to serve the hashers with cold beer. A bit social jocundity occupies 10 minutes. Teddy Secret, Just Mini, Crash Test Dummy and DZ do not drink. Stoned Age rushes in as latecomer. Bjorn Again drinks a special beer.

The area is beyond recognition and combing a flyover to sniff out the mark. Unwittingly coming together the northern gate of Longtanhu park. Hash Cash DZ counts the hashers and buys the tickets to get into an Open Check. A teamwork shortly locates a marked trail via a stone bridge and along the lake and up to another stone bridge. An Open Check separates the hashers. SA and SS crack the checking points to leapfrog. A compound pavilions with gallery plays fast and loose with the discretion of the hashers about the direction. Dense lotus leaves tower a macrobiotic matrix in the lake. A hashing line-up like whirlwind file out of the park. From an Open Check, quickly pinpointing a zigzag overpass and on right to meet up the second beer stop. The owner of the grocery warmly entertains the hashers. Dr. Shocker displays his new tattoo regarding his girlfriend’s image on his arm. All at once, SM seems like got through a warp tornado, his full body blooms with swarms of tiny red pimples (mostly due to mental stress or excitement or allergy, resulting in acetylcholine release after exercise). It makes the hashers eyes-devouring. SM stops drinking and sources medicine. Hot Cockolate shares her tasty chocolate with the hashers. Super Squirter shows up as latecomer. Homestretch is through digs quarters and along with noisy street to loop back to restaurant.

The circle is sited on sidewalk with 2 cartons of sponsored Taste Room beer. No Shit Sherlock just puts on a pair of socks to attend as if he steps on something-bashing rhythm. Vicarious GM AB hosts a performance with reminder from the other hashers per Hash procedure. 7 virgins are welcomed with little cock keepsake and the Beijing Hash song, one of whom is brought in by Karate. 2 latecomers, 1 long-time-no-see being defined by who did not join hashing for 2 weeks or up, etc. DH like priapus belts out the episodic Hash songs between wind and water one by one. Somehow AB competes to undress T-shirt with DH. Drinks Like a Girl stands out to yell out Anal Compulsion for her birthday. The hashers choir the Birthday Dirge with stamping on the ground. Rambo No.5 clicks pictures himself. Wandering Tongue snaps Hash photos. SM is called in to undress T-shirt to observe his tornado pimples, it’s magic that all of them have gone after he took 4 pills. In the end, GM SS comes forward to lead a chorus of Swing Low with all hashers. Circa 15 hashers eat yummy local food in a decent space. We play the hashing like nobody’s business.