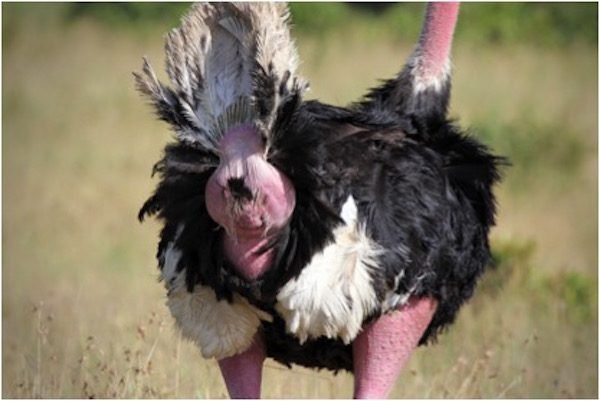 Thank goodness! Beijing citizens awake to cut down fireworks for which keeping a clean air is overriding demand in celebrating the very Chinese traditional festival. Even though many active hashers left for home and travelling, still do there are nearly 25 hashers bracing themselves for a windy, freezing and beautiful day. Cockarazzi chases after a local passerby holding an outsize color cock toy for photographing his rare COCK for this Year of the Cock. Acting RA Lost in Marks & Spencer has his hands full on the job of acting Hash Flash. Lick It To Ride kicks in both functions of acting GM and acting another RA at the launching pad on the roadside. The hare Herr Splashy Pants instructs 5 virgins about the marks. 3 hares, such as HSP, Pickle Boy and PreLubed as walking hare carrying Charlie in a backpack behind her back, take their knees to accept a blessing by sipping drops of beer from RA. After spreading out to check the marks, only 8 runners stop at nothing to hunt down the running trail, they cannot, though. The alpha mark is always set for a challenging fun. At last the hares have to furnish clue behind a pole in an alley.

Winding through hutongs and green belt for a little while and then striding over a foot bridge to another artistic green belt along the frozen canal. The virgins still don’t get used to yell out the marks. Crossing 2 blocks of streets to move in Qingnian park and knocking into a statue of Book and Masks that seems to indicate a realistic shelter. The runners have group photo for Hash Hold clicked by Sweet FA. Going ahead through 2 small bridges to file out of the park and on right. The pure virgin doesn’t have a sense to find a sign on the pole. Somehow reaching the first beer stop in a digs area where a big group of walkers have started to lubricate. Bjorn Again turns up out of blue as latecomer. Ponyo and Charlie are gamesome but Emmy is maungy. The hashers talk and drink by twos and threes. The surrounding shows a distinct smooth quietness by the festival for going home, whacko! 2 walkers weigh in the running trail like Just Dan and Pyro. Doing an Open Check to lunge at the main road and crossing a foot bridge to turn right to cross an avenue, a block and a living community until gathering at the northern gate of Ditan park. 10 yuan for admission per head.

The visitors are crowding in upon the oldest Temple Fair as the 32th session that visitors can reach 170,000 people on average every day. Meanwhile diverse security facilities, security personnels and police have been at concert pitch. The hare HSP hands each runner a ticket and advises matters that need attention and then the runners check in and the parkway lined with red lanterns and vernacular art modelings has been jam-packed by visitors. HSP has to lead the way to blaze a new trail partly, thru less thronged veranda, statues and dry woodlets by cutting off the checkpoints for avoiding the hasher to get lost. Entering the threesome stone ancient archways to see a spacy the Earth Altar decorating with yellow pavilion on the center. Even if the hashers don’t meet a Qing dynasty’s royal sacrificial cortage and emperor in yellow that have been being impersonated by the people per annum. Snapping group pictures for 10 runners sure at the other Hash Hold. A flock of local sightseers come out to shoot pictures for hashers. Elbowing our way through the side gate. In fact, the chalk marks laid in the morning by the hares have been worn off by the passers at 3:20 pm or so. The hashers opt for lonesome zone to run through and also through the part of lengthy row of festival profiteering baubles and trinkets stands. Along with the stream of people, the runners squeeze out of the very busy Imperial Garden via the southern gate.

With dispersing confluence, the runners plunge into the ocean of hutongs to explore a way forward, passing by Confucian temple where some of gaggle of local visitors spar with each other in the treble. Once being on left at a tiny crossing, a small shop in a hutong warmly receives the runners for the second beer stop. Ass Tonguer and LITR ride bicycles to bob up after they have to send 2 dogs to home because restaurants don’t allow dog in and parks don’t allow dog in. Overtime waiting for walkers until PreLubed, Crash Test Dummy and Just Elisa catch up but 5 walkers missing, like Pretty Woman, Cockarazzi, Transylvestite, Just Desmond and Just Tracy. The hashers belt out Why Are We Waiting song that causes the locals, some smiling at hashers, some glaring at hashers. Many hashers get feel of this area and soon head straight on the right track without checking out the branches. 3 streets and alleys later, all hashers loop back to restaurant in turns. 2 virgins leave early. Comes More Often dragging the irk of Chinese tradition disappears in the beginning of mafficking a circle ritual at a treelawn. PreLubed’s mom from countryside of China is the first time to visit the hashing and Beijing to follow thru, particularly the first time to eye the foreigners in her life like other many Chinese people. (As PreLubed discloses her mom’s words later, hashers are crazy for running in such a cold day).

Acting GM LITR and acting RA LiM&S co-host a chic performance. AT as Hash Flash takes candid photographies. Charlie is put on a winter coat. 3 virgins are welcomed with The Beijing Hash Song by hashers. These 3 hares are called out to drink a couple of times. Of course, lifting one’s elbow with a cock of shame is necessary for this Year of the Cock. SFA is picked in for a libation with it. AT as Yoga Master outleaps to use her hands to prop up the ground and LITR loses no time to clutch her ankles to clasp her legs, wow! Another 69 position is shaped for seconds accompanied by Sweet 69 song sung by hashers in amazement. Acting RA LITR anounces to name Just Dan. Screening out a round of nominations, Beer Wolf epitomizes his character. When he falters at a naming rite with frigid beer shower, RA gives him a cock of shame to suck-swallow urged by Suck Swallow song from hashers in high spirit and RA steps to pour a bag of porridge oats on Just Dan’s dense curly hair. The Hasher Song by hashers blesses his official hashing life. It turns out that acting RA LiM&S present 3 versions of Swing Low’s chorus with hashers. 16 hashers taste traditional Beijing snacks beyond a bit budget and SFA gifts 3 hares a koozie of Qingdao H3 respectively. Happy Chinese New Year!