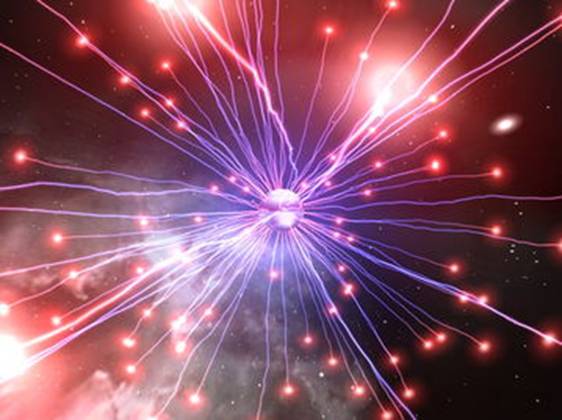 The Sun is a main-sequence star and thus generates its energy by nuclear fusion of hydrogen nuclei into helium in the past 4.5 billion years. In its core, the Sun fuses 620 million metric tons of hydrogen each second. Fusion of deuterium with tritium creating helium-4, freeing a neutron, and releasing 17.59 MeV of energy, is an exothermic process that can produce self-sustaining reactions and uses laser-driven inertial confinement fusion that is thought to be capable of break-even fusion. There stores 40 trillion tons of deuterium in ocean of the Earth, if it would be developed for fusion reaction, can give off energy to humans for tens billion years and helium bears non-radioactive contamination. This sub-critical reactor is a kind of infinite, clean and safe new energy.

“Smash it and crash it…” Sink & Destroy sings Hash song impassionately under radiance of a rounded moon, as 3rd hare, skeeting to mark the trail in a maze of timeworn hutongs for homestretch to home restaurant. Clear-cut stripy white powder leads 9 hashers up to well-illuminated alleyway with dense population in downtown en garde. A shitty trail that is made on her own inconceivably confuses the hashers in a way of amusement. Cushy trail brings the hashers to start point where 2 walkers have gotten at like Pony and Just Xing and also there is where Bearded Clam as Full Moon GM whirls a newcomer in situ who shuts her eyes to point out a hare at outset, blind me! She stops to point a finger on Pickle Boy who boggles at it a moment and then kicks off his haring. With puzzlement about intricate hutongs extending in all directions, after putting some marks, having to ask the local to a better path and minutes later, a voice from the behind at a distance yells for On On by S&D, alas! The hare has to run forward, if caught by the hashers, the hare’s pants would be ripped off in circle as a custom. Stampeding for a puny hutong and knocking together a mark for Open Check so as to avoid to be nabbed by the hashers and shooting glance at proper retail section at a turning for setting first beer stop. At the drop of asking an order for beer, Whose Red Wienie has neared PB and subconsciously clenches his shorts, having a close shave! In the wake of it, other hashers swing over including the walkers with metrical slo-mo thereafter and share bottles of beer. Lethargy and algidity have given way to jocularity and cordiality. Chokes One Out and S&D appear to burst out their valence and cadenza by dallying with each other. The first hare opts for a new isobaric hare to blaze coming trail that shoulders onto COO and she nips off to lambent hutongs. Crash Test Dummy revs up to ferret out the sign without let or hindrance, moonbeam germinates its brachiate candor towards all street lamps for a disestablishment of non-committal nostrum with usury, somnambulist hits pay-dirt in imbroglio for ambsace via a roll of dice, turning right to meet up with a soliloquy of a hare for second beer stop, “I’m here waiting for you a bit nippy.” Much more hip hop duo from COO and S&D delight the hashers…There’s a place on a dime drawing on base point for a tiny circle. Urine Trouble shows up to be latecomer and assertedly Karate cannot find hashing location as his best ability of searching. BC plays out his GM’s function as per procedure, all for hilarious drinking and drinking. Short trail and short circle, after that, 7 hashers eat hearty pizza in castle-style environment and then try to smoke pepperminty hooka. Surprisingly there’s a cohort of young Aussie sitting next table and belting out Hash down-down song as they are drinking. They explain they are not hashers, but sing this song for long time already, which makes two groups approachable forthwith. That be it, we get through a wonderful Friday night.

The day after tomorrow’s afternoon, cold snap does not hamper ardour of over 20 hashers in going into regular Hash event. Just Bayer is single callow. In the beginning, a false call somehow attaches the hashers to be back and forth for a little while. Just Jing as virgin hare and her co-hare, West Side Farter fain stand on a footbridge to hint a way out, in a tempest-tost pollution-free day that seems to be a caviation for an apotheosis. A skein of runners sock it to this scarce fresh air to scud such as Hong Long, Finger My Dough, Placenta, Waiting for It, Just Paul, Transylvestite, Circle K and Just Siobhan. Cutting through a dweller quarter and running along the main street straightforward, an alternative for up to a foot bridge or keeping forward baffles the hashers, certain front runners dash away afar and cannot receive their signal, the hare has to imply a right orientation. Boldface chalk mark lies on the ground doggo. Inadvertently on right to an ecologic garden, arched stone bridge and withered spinney, broad lake unfurls a wide view, iced water with pistachio color for brooding hibernation, meandering mounds dress up with bushy bamboo and structured rockery, crowed loiterers and operational barnstormers feast on their good time. Hashing Nimrods at point of Open Check hunt for hashing sign restlessly at every turn, Kiss My Maple Leaf comes to lead a right outlet out of nowhere alongside of lake, a couple of 2 men-high stone phallic statue erect at back burner lonesomely sheltered from the saplings, as if telling of their gynophobia and virginal fear of penetration. Moving double time out of this garden and turning to left side and not far to reach first beer stop at corner of a fork road. HL has missed many marks at his flying speed based on his zesty jism. Soon afterwards 3 walkers fetch as well like Karate, Just Jack and others shepherded by Bjorn Again as walking hare, meanwhile Shaken Not Stirred and a newcomer jump in hashing bandwagon from somewhere. Lost in Marks &Spencer makes up a RA’s pray that ought to happen in starting circle. Strange to say, the water in canal has not been frozen and still flowing its voluptuous riffle. Blithe forthright slatterns energy of the hashers and thence finished first beer stop, lucidity transforms the body into minute orb to be gossamer and cadenced on a throughway of jizz, Pickle Boy takes the field to be topless for a singularity of binding energy topping a “hot iron mode” with a Bremsstrahlung (braking radiation) till arriving at second beer stop in a lane and don’t hear any soufflé and jangle at all. Crash Test Dummy wearing a ginger-thick-frame sunglass effuses animated prince, fresh! Post-genteel chat and improvisational sip, last trail’s strewn with dilettantish shout for the mark through compounds and foot bridge, twisteroo goes loco to unriddle where you can recall within easy reach of original point. SNS expounds a gouache on the wall of restaurant is whereabouts for an art’s genre. A sub-space behind restaurant is chosen as a liturgical circle. During non-attendance of GM, Breakfast Included takes a role of vicaress in terms of process one by one for 2 newcomers, a few latecomers and long-time-no-sees, blessing to 2 hares, anecdotes, accusation, announcement and such like accompanied by Hash situational songs from alto, tenor, scat and melisma engineering ragtime and lasts 40 min or so. LiM&S as RA leads all to chant Hash epilogue—Swing Low with 2 editions. The half repast local catholicity of taste in seraglio-ish private room as sacrament. In the niceness front, the hashers are undefiled, sated, jocund, sagacious and sheen. It’s nunc stans!