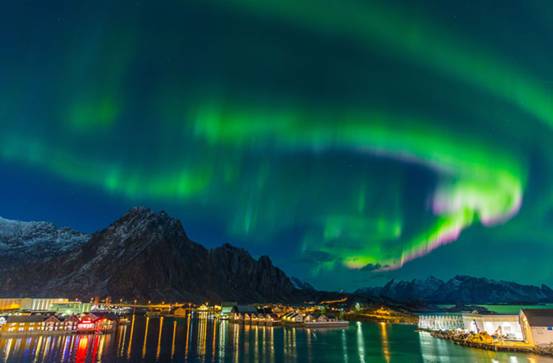 An Aurora Is Seen Over The Lofot Islands In Norway

“On…On!” rumbling drawly calls for hashing signs in the trail from Filthy Habit, which braces up the spirits of sixty-odd hashers attiring omnifarious greens glutting the public’s eyes with smile and whisper for four festival celebrations as if Saint Patrick proclaims a new epoch is around the corner under supervision of versatile imperator, Julius Caesar, into an irrational number of Pi’s world for aiding local 3.15 Day that not only cracks down on shoddy products but also shady ideology for using last four numbers of Pi to prove the truth of the life. No wonder West Side Farter rants and raves, “All the trails are Oh Shit! What’s going on?” Life of Pee (Pi) could be coming to break it down shortly.

Scanning around the starting point for a while like Discount Dildo, Finger My Dough, Just Bryon (Aussie), Chippendale, Shaven Not Stirred, Just MengMeng, Just Oracle, newcomers, etc, and then making sure a direction to move on, a flowing cohort of green hashers look like a live blockbuster to create quite a stir all along in streets and avenues. The passers-by and bystanders snapshoot the hashers every so often. Whole paths are familiar to most hashers whom pass through a treelawn by a treelawn and wedge into the part of alleyway, those who stay ahead always check out at a stretch likelihood of where the trail falls into fly-by-night status in a roundabout way at Open Check, Two-Way and Three-Way, such as Chokes One out, Sink and Destroy, Brussel from Brussel, Just Patrick and so on.

At a checkpoint of Two-way to probe two Oh Shit’s marks, a little bit of confusion later on, DH re-marks a way out; local hashers misunderstand a toga as a Buddhist robe like Hebei House Herpes, Just Mia and newcomers; Hard to Live with and PB help to interpret for ancient Greek senator; once blundering into a dweller quarter, catching sight of over ten of walkers have reached at first beer stop. Buzzing and crowded hashers do it justice nineteen bottle of beers stretto. Molly holds a flat flasket of Scottish whisky to treat the hashers; Karate with relish converses with newcomers; everyone cannot talk one another because of big group, soon hitting the road to the next. Some keep relative silent, for instance, Lost in Marks and Spencer, Dark Shaft, Just Byron (US-Hongkong), CC, Hooder’s Brother, Just Sarah, Just Sunny, Just Toy, AutoBlow, Creamy Lips, etc.,

Jingo and Puppy tease and race in tacit understanding each other. When climbing on a foot bridge, a shadow roars past hashing lineup from the rear, turns out he’s Blow Job riding over his heavy metal’s tinge to birr and fly with big smile; droning on a bypath for a short time and debouching a wide-ranging of flourishing streets block by block and business area by business area, crossing a busy intersection down to a canal bank, on left up to a bar street where recreational folks chuckle for the passing of green hashers in swarms. Even though eyeing a squad of walkers to move on in reverse, the runners in quick succession get at second beer stop on narrow shoulder of the road. Opportune nectar moistens the dry throats of the hashers stepwise. Lost walkers promenade to meet back with runners in a little while. Sufficient sunshine tells the hashers of spring season that osculates a round of seminal energy to be in the ascendant.

Apropos of the homestretch, majority ken how to be back to end point by the light of nature. A small length of embassy area and quixotic traffic lights as well as crossover bustling avenues lead the hashers up to where the hashers start without extenuating circumstance. Agent Orgy seems to put on a spurt over a finishing line, wait a moment, it does not count because it’s Bearded Clam who piggybacks her to sprint; Drill Me and Nut Pirate as latecomers appear, or they still linger at Paddy’s bar. All hashers congregate in the façade of Paddy O Shea’s to take memorable picture. A large observance circle is settled in a passageway next to Paddy’s bar officiated at by D&C for GM and CoV for RA by turns in long portamento of summoning a circle up from GM. Being concentrated upon the circle and placing private things on the back burner.

More than ten of newcomers are welcome ceremoniously with Hash song and little souvenir for each after answering who made him/her to come and what’s his/her name as well as where is he/she from; Eratica steps in the circle for his leave-taking, but it seems to have occurred once before for him, by which he clutches a chamber pot for a drink this time; BC acquires a BJ #69 run patch; Breakfast Included achieves her BJ #300 gilt-edged mug to incite her remarkable persevere; Molly, Henpected and Ed the Veg birl together for Scottish hashers’s visitation; high time for Just Daniel to attain a Hash handle after inviting hashers’s opinions on spot, at last he accepts it being known for Swedish Wood on his knees in the circle under beer shower with chortle and chorale from all hashers; a tap of brimmer by a tap of brimmer for certain hashers, jolly d aura affects everybody on site for an ardour. In the end, CoV precents a chorus of Swing Low with all and singular. Most dine on a palatable Indian cuisine. Subsequent to the circle, PB has been amnesiac and wassails until he gets a time machine to home.