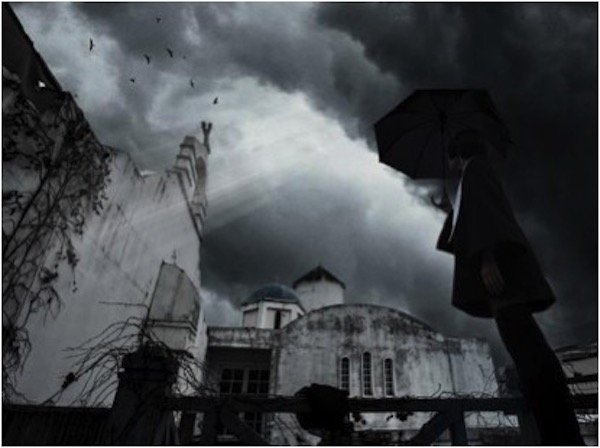 Hope is a good thing, maybe the best of things and no good thing ever dies.

#1835 hashing had to be cancelled and moved to Hash bar Paddy’s because of around 300 PM AQI on December 30th, 2017. How meaningful it is for the last hashing of 2017! About 15 hashers turned up to drink, especially for Agent Orgy’s FOYW. Although Crash Test Dummy didn’t drink, he can’t miss a hashing for his life. Many hashers take vacation somewhere.

Saturday, January 6th, 2018. The first hashing in the New Year segues #1835’s trail in a nice day. The 4 hares Pickle Boy, Little Red Shit Hood, Not Tonight and Long Legs lead 4 hashers into a self-redemption route. GM cum RA Shanghai Man summons the start circle and blesses the trail. The hashers weave our way through the crowded Dahongmen Clothes Wholesale Market. The hare PB constantly re-marks the trail that the most marks have been worn off by the steps of throng. A Hash Hold shows a color 4 numbers’ model for 2018 at a square. 11 runners and 7 walkers respectively click group photo with this year number. Pushing through the crowd in the north along with the new marks by the hare until striding over a hustling bridge and going on another concourse, then a bustling tunnel. Molotov Cock foregoes very fast, but seems he’s losing the trail. Crash Test Dummy takes the lead. When sinking into a block of hutongs, the marks are much more stable and calling for the signs in tiny hutongs echoes and cutting through a sweep of old style 6-storey residential buildings and out of it, Blow Harder shouts out a way forward and crossing the street to reach the first beer stop. The walkers have arrived there with beer. The shop owner washed away the BS marks twice. Suddenly finding MC has not been here. Awaiting for longer, still cannot see the veteran hasher MC. GM has to yell the Open Check onward. PB becomes a solo running hare to hint the trail. Somehow many runners lost the trail have to be into the walking trail. Only Breakfast Included and Red Snatcher are on the running track. And catching sight of MC playing basket ball in a court with a bunch of local boys.

The 3 runners keep on along the trail, deciding to go to the walking trail and running into another 3 runners checking the running trail like Lost In Marks & Spencer who visit BJH3 for a few weeks, Principal Penetration and Just Wenhui. And then the hare PB turns around to bring these runners to the running trail, via a noisy market, a sewage river, Wanfangting park, overpass, southern 3rd ring road to the second beer stop downstairs a residential building. Of course, the other hashers fetched up there earlier. And snapping a group picture with PB’s place called a “battlefield” for his life. The next is the same trail for the run and walk that the runners course back to the HH house in a hard-driving way. A group of walkers wend through a community management office as PB’s government, to a sewage river bank and some practice the local whip to make crack sound, all fail, though, such as Bitch Bandit, Just Jourdan, SHM, PB and LRSH. Just Niuniu photographs it. The end of the forlorn river bank soon emerges the trail end. Yikes! MC comes back as well. GM and RA SHM hosts the performance in a corner of subway exit. The 4 hares are called out to swill. A virgin is hailed to accept a welcoming ceremony with little yellow cock. Rambo Number Five wins #69 run patch. MC carries out a string of “accusations”, 5-ish. The numinous and polymorphous Hash songs resound across the heaven. A local young man with relish watches the Hash show till in the evening. The Swing Low culminates the hashers in a choral form as a finale. Mind the Gap as latecummer rushes in for dinner. 8 hashers scoff up yummy food in a private room. As if each taps into an escape tunnel with different sharp tools out of niche in life, realizing that fear can hold the self prisoner, hope can set the self free.