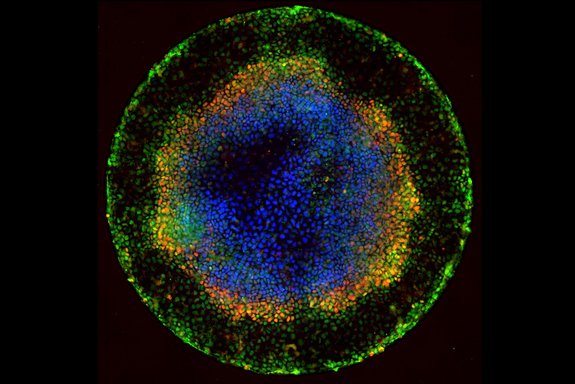 As seen under a microscope, human embryonic cells (colored dots) confined to areas of precisely controlled size and shape start to specialize and form distinct layers similar to those seen in early development. Stem cells shape up.

Caddish smog once again sabotages public mood of activities outdoors under a threat of PM 400 around in Beijing, setting it at defiance to public rage on Saturday, November 29th, 2014, such a cause-and-effect scenario! Fortunately 15 BJ’s Boxer hashers take part in 526th Hash Event in the afternoon with PM 200 around with about 20 Tianjin’s hashers in outskirt of TJ, organized by Urine Trouble and Pussy Nibbles as Boxer GM.

Outlandish wilderness and lakes where man-high buff reeds blanket this extensive unmanned area, vicarious TJ GM, Sperm Bank summons the hashers for a circled do’s and don’ts; there are several masked faces like Benz Over, PN, Hot Down South and so on; good to see Short Shift’s right hand is recovering from a previous hurt; Just Kyle wearing a fedora and leather jacket looks like a hunter at full cock; Nobody Secret with her eccentric smile played her solo hare to embrace the hashers to grope her secret trail.

DumbAss shows his intention of Je Maintiendrai by leading a way; Just Chloe and Pickle Boy carve out a novel direction; UT and PN disappear in other trail; Finger My Dough, Rabbit and local hashers scamper about another bearing; Crash Test Dummy and HDS transfer the sound volume by lingering in the middle; checking round and round, yelling couple times, “Are you?” echoing same things, “Looking!” as a matter of fact, at starting point, the hashers have gotten lost neck and crop. GrassHopper has to ring the hare to pinpoint the trail to sting on a tree as an aid.

Quorum sensing induces the hashers to be comfortable. A cookie-cutter of empty purple villas in a distance are being wreathed in grayish-white mote adrift on the left-side of the hashers, on the right up head, there’s a far-away shadow of a tree in a vague horizon to perk up the hashers. DumbAss is the first to signal for “On On!” on the tight heels of his paces, finding the flour on the ground and stones one after another. Trip V seems to shout out of tone to his extreme for On On; 2 French visitors tag after the mark being steeped in their exhilaration of maiden trip here; Just Ross from BJ wades into his virgin hashing.

A nectar stop is settled on a cemented road with hasher’s limo bus. Some walkers have been there. Drinking and talking in twos and threes, some catch up with time to take the pictures for the very wild open. SB whoops, “Open Check!”

Heart On’s calling for a sign guides the hashers a way on long asphalt street and can observe the local dwellers in dribs and drabs and much more a contiguity of dilapidated ramblers where somewhat peasants and scavengers still live there. Whole earth road has been rife with fetid household garbage. Just Chloe detects a dead cat on the top of dump heap. Two-Ways baffle the hashers’s judgement. A listless watchdog crouches down at the doorway to peep at the passer-by. GH has to phone the hare to confirm a trail in order to forget the mark and directly head to restaurant where a hot spring in sooth is receiving the hashers. Hurrah!

Unawares discovering a signpost of a 4-star spa hotel without English logo and turning right for a little while, having sight of the hare standing by hasher’s limo bus. After a quick change for clothes, the hashers step into a deluxe dining hall at 2nd floor. Polished marble ground almost mirrors the images of hashers. Eating up 2 lunch-boxes of yummy cake baked and contributed by FMD as another master baker. 3 latecomers from BJ turn up bit by bit such as Just Blair, Just Sonny and Whose Your Dada. A metabolic circle takes place indoors hosted by SB whom garlands a quality aureate toilet seat on his neck and tops a dinosaur’s red multi-horn hat with long horny tail to his back.

First off, gifting some presents to particular hashers such as Hitchhiker who gains a big ashtray that must be good for her chain smoke; All Night Long, Tweety Pie and others for their respective peculiarity. And next procedure in circle is similar to BJ’s for 4 newcomers, 3 latecomers, a bunch of long-time-no-sees, accusation and announcement. UT functions as SongMaster. In between, working in irrigating the hare with cheers from everybody. PN representing BJ’s hashers presides over for certain items. There are also cute brat hashers such as 3 Junior Sperm Banks and Tweety Poo, etc; Wet Dream and TP as BeerB**tch serve the hashers as usual. Turns out 2 versions of Swing Low precented by SB resonate all hashers with postures.

With nice appetite, gobbling up a palatable local food, later on, moving into an adjacent bath hall decorating with Greek style and Chinese-South Korea indicators for a thermal spring and different bathing pools contain different temperature of subterranean heat as well as fish massage which the part of or whole body sink in a pond where there are a shoal of black puny fishes coming over gnawing callus on your skin that feels itchy or galvanic, which disports all hashers with impression for nearly one hour. Time-bound hashers have to leave for returning downtown of TJ for 30 min and PN, UT and some hashers troll Hash classic songs to while away on the limo bus to train station. Buying train ticket without a hitch and most of hashers from BJ hit the grit of BJ about 10:30pm.

More or less 2 o’clock in the afternoon of the next day in the center of BJ. In a fancy restaurant, CumShot is being busy with stockpiling Hash cash; Crash Test Dummy is touting Haberdashery and Hash gadgets; Diaphanous wind blows into cooling spell, some still dressing summer clothes must be super cool such as Whose Red Wienie, Dazed & Confused, Pickle Boy and specially CTD who seems to live in a homoiothermal world, perhaps it is responsible for cryogenics. Over 20 vibrant hashers do the deed for hashing fugue by winding through one art zone by one art zone interspersing an artistic trail with diverse sculptures and statues ushered by Shaken Not Stirred and Whose Your Dada as running hares and quite a bit crossing the walking trail to meet up with a couple of walkers directed by Hebei Horse Herpes for HeadMistress, Master Baker, Bjorn Again, Karate and so forth.

On the assumption that glasnost, there’s the rub, is not nitty-gritty and learn to roll with it and that must be gobsmacked to the public. By the time personal guts could be paramount.

Snaking through a green living complex, Just Paul and Just Eric branch out from a point of Open Check to explore a sign; a hunk of yellow shed leaves have piled up on the sidewalk. From time to time, the hare gives a tip out of perplexed status of hashers. Finger My Dough gets the hang of hashing taste in which to take the lead with his educated guess as much as he can; glad to see Black Hole comes back from her unfair accident in past months and keeps as fresh as a daisy to shout out a sign on a post; there’s a dogleg at a corner hitting the first beer stop, seems to be a tuyere where a gust blasts the hashers blinking and luckily this beer stop is tiny supermarket for a haven inside. All hashers enter to chat, drink, nosh and photograph. Breakfast Included invariably screens out her favorite ice cream for a refreshingness.

Rushing down a sloping bends under railway, corkscrewing forward then gathering with walkers anew, searching high and low for a sign from an Open Check, finalizing an point from the hare to carry on a trail along with a quiet railway, passing thru a row of dirty houses, making on right into a bizarre open park alongside a canal, sculptures and rockeries filled with this modern park. Some get group pictures. CTD hastens to take a candid photograph for perfect moment; Teddy Secret prefers to make her a variety of poses for photos; some remain consecutive hashers mettlesome such as Pussy Nibbles, Heart On, Just Ross and otherwise. Soon reaching the second beer stop on the side of bustling venue, some sit around a table for drinking and talking, when taking the road, most can identify a direction to home restaurant. Striding over a big overpass, breaking into a digs zone, all marks on the post guide to home restaurant and then putting together for a moment, SNS as hare brings all hashers to visit an art museum opposite restaurant; Red Snatcher and Creamy Lips turn up for a circle only.

Due to timeliness, no more than opening an art hall for hashers, simple association is linked with whiteness, butterball statue and faddish furnishings, embodying a northernmost culture, being hard-pressed to be preponderance of ideas. In all events, thanks the hares for their elaborate preparations for an innovative trail to the hashers.

The celebrating circle still stages on outside right in front of restaurant with nipping bise. WRW has curled up his arms into his sweater and only uses his mouth to suck at a cup for a libation; W7 creates more shtick by wrapping up himself with his huge motor canvas and RS and CS soon slip into it for a wind-proof shelter; D&C as GM over-shouts whirring of hurricane; PB and CTD volunteer to service the hashers with beer, a very few hashers birl, though. Programmed process performs its amusement towards the hashers. WYD’s farewell enables most to drink one and W7’s motor canvas seems like be useful more and more that raises the waves of the laugh; making long one short, D&C howls 4 letters for O.R.G.Y and the hashers respond it ringingly as a denouement. Most tuck in a tasty and rich hotpot in brand-new bright ambience. Nut Pirate pops in for a hashing dinner, who’s latest comer.

Wherever you go and come, the regions has been being expanded smaller and smaller, but analogous stem cells make the people closer and closer even as hashing hilarity.